The race reports are coming in thick and fast from all over (even the national newspapers are getting in on it) so I thought I’d best get on with mine before it becomes unfashionable.

As a child of the modern era I often overuse superlatives to describe something that probably doesn’t warrant it, e.g. “these yum yums are sensational”, when they’re actually mediocre at best. However, the Steel City Downhill is amazing! Pure class! Absoluuuutely fan-tastic!

Let me explain why:

It’s the pinnacle of mates racing in Sheffield – Everybody knows everybody and this makes the atmosphere tingle with excitement as the next rider down is one of your best mates or some cool lad you met on the trails in and around Sheffield. I remember being stood at the start ramp and cheering off a good majority of riders not just by shouting “pedal!” but “pedal JJ!” or “smash it Duncan!” or “Biggin’s a cunt!”.

It’s a race and it’s in Sheffield – It would be rude not to head along.

Steve Peat is there (not at Sea Otter!) – Can’t beat chilling with a legend.

There’s a big turnout from all categories – These races have been a complete sellout. There was also the addition of the ripper category who put many, more senior, riders to shame with their mad skills.

Rob Jolley smashed the shit out of a dog bowl, not literal shit, in the name of heckling – I’m pretty sure he shotgunned his marshal point next to the gap jump of doom before the track had even been dug. 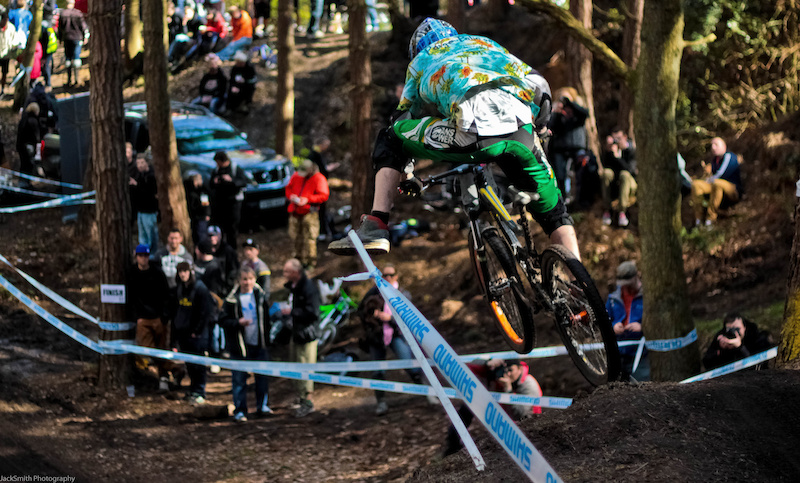 One footer on the sendorrr from Joe Camus. Photo credit to Jack Smith.

I could go on…

For me, the run up to the race started about a month ago on the first dig day. A big group of volunteers turned out to make the course what it was. They were rewarded with lunch and a brand new track. It’s great to know how easy it is to get a group of people together who work very hard shifting boulders and digging at the earth like there are diamonds buried beneath. Without them the race would have been impossible.

From here the track was left to bed in and bake hard in the summer of spring 2012, only to be drenched in the last couple of weeks in the floods of 2012… In the days running up to the event there were a few modifications and finishing touches to make a track ready to get many miles of rubber chucked down her by the Sheffield massive.

How did it go?:
For me? Terrible… I had two shocking runs, missing lines, losing momentum (which was vital to do well on this track, especially the section leading up to the hip jump before the sweet berms near the bottom), and breaking my bike. However, looking back I realize that none of that matters. I still had an excellent day, missing out on doing as many practice runs as I could because I’d seen someone else I wanted to chat to. Also, I definitely consider myself to be among the elite of hecklers. Only beaten by my mate Phil (who took a wheel to the face after a rider took a stack and the bike was catapulted into Phil… Karma?) who was calling upon the crowd to perform Mexican waves, dance routines and silent cheers as riders rode by. 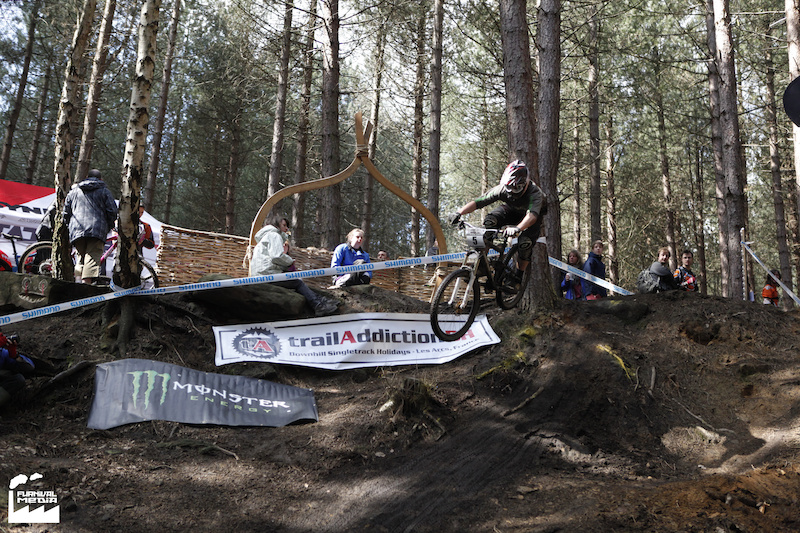 Cheers for this pic Tom Richards!

For the organizers? From what I understand it was spot on, big success. No one majorly injured, few timing issues, big support from the spectators and NO RAIN (on the day…)!

There are many pictures and a few video edits of the race emerging thick and fast so have a look out. I’ll add a list of links at the bottom of this article of anything that has taken my fancy.

This one is pretty rad!:

A good write-up from Mr. Horscroft who, I’m sure many people will agree, is an excellent fellow: http://www.planetfear.com/news/Steel_City_Mini_Downhill__Sheffield_2792.html

This report, from Tom Richards, is on the front page of pinkbike. Contains photos and a vid: http://leafkona.pinkbike.com/blog/Peatys-Steel-City-Downhill-2012.html

Also, many of you will have seen this article on The Guardian. Big stuff for Sheffield!: http://www.guardian.co.uk/environment/bike-blog/2012/apr/26/steel-city-downhill-race-cycling-wildlife