First off… watch this great edit done by Baybutt, it’ll sum up the nights activities much better than my waffle.

Round 6 was planned to be held up at Farmer Jacks field on the amazing cow patted berms. Massive thanks to him for letting us play! That was before the snow came… again. In the days leading up to last Tuesday there were many texts and phone calls checking on conditions and accessibility. It all just adds to the excitement. On the day, the roads were clear but the farm yard and the berms were under a few inches of neige. Peaty was out early shovelling off the first few corners to make sure they were running ok and Josh Lewis had run a quad over them a couple of days before. JoBo helped with the final few corners later in the afternoon after he’d played cash in the attic at Steve’s.

When I arrived the Genny and bulding lights were getting set up and Jack already had a massive fire going to keep us warm. All the makings of a royal nights racing. Once the rest of the lights were set up to illuminate the lower turns practice started in earnest. Despite the snow the course was actually pretty grippy once you could distinguish between snow berm and dirt berm. That track is so much fun with a couple of very challenging corners.

With 23 riders signed up racing got underway at 8 and straight in to the big guns, Will Swinden vs Chay Granby. Chay is currently trying to chase down Timmy at the top of the table and is feeling the pressure. He managed to fend of Mini Swinny… but only just! Team ‘This is Peaty’  also faced off in the first with Steve deliberating whether Joe could use the points more than him. He decided not and smashed him. Craig Evans was on fire from the off and carrying more speed out of the first right hander than anyone else by far, absolutely amazing to watch. 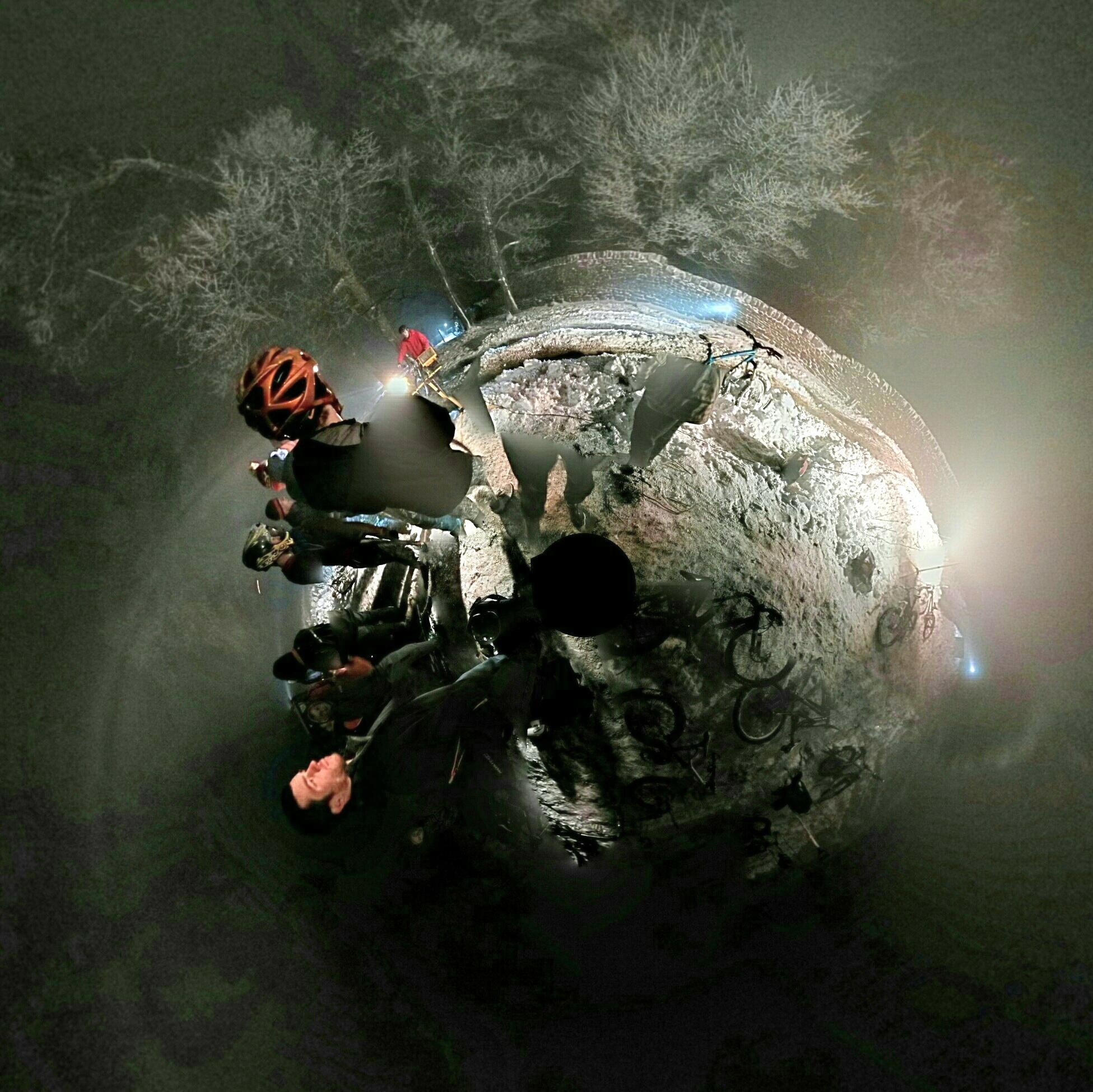 As our lovely timing ladies had decided to take the night off I was down at the finish line being ably assisted by a lovely cast of drop outs. First of Chris Pearson joined me and we developed the ‘rocking out’ technique for stop watch synchronisation. After being put out in the first round Baybutt and Joe Spivey also came to help out and we danced about, took the piss and jumped out of the way of crashing racers getting squirly on the finish table top. Tom England rounded out the evenings timing crew, many thanks to you all. That poor, poor whistle.

The 2nd round put an end to Chay’s points dream as Dave Camus showed him who was boss. Craig Evans also broke the 15 second mark for the first time while racing Tom Duncan who ended up over a berm. The Quarters saw Timmy out classed for once by Craig, amazing, and Loose Dog also showed me how it was done but at least he gave me a smile doing it. This setup a Peat, Evans Semi which was much hyped and anticipated. Craig had been putting down consistently faster times all night, could old school rise to the challenge? They both felt the pressure and had sloppy and slow first runs but Craig was ever so slightly ahead. In the other semi Chris Pearson showed his skills and kept his cool dispatching Loose dog who had another massive off in his second run. The same happened to Craig in his second run, misjudging the flat left and giving the win to Peaty.  This was almost as humiliating as loosing his car keys and having to call his mum to rescue him. Steve went on take the win although only on time as Chris won the second leg and Craig had to make do with 3rd.

One thing that struck me again about Dual was that the racing is actually only a sideshow to the main event. Socialising. There’s so much chat and banter going on all night that a lot of the runs actually go almost unwatched. With there being a lot of snow about of course there was the obligatory snow ball fight, epic by any proportions. Naturally this also spilled over to the racing and the last few rounds of racing had added flying obstacles. Brilliant.

This leaves the top of table pretty tight but Timmy is looking pretty unassailable at this stage. Can Chay pull his Socks up and catch him up or will Chris overtake him before he gets chance? Until the next time…