As the Sun continues to shine, so the Spring Series continues to gather momentum. Race 3 was a mini DH out in the peaks on an old favourite track which has a steep wide open, fast top section that then dips in to the woods for some bar smacking tight flowing turns. It then pops you out in to a rough rooty left which sets you up for two of the sweetest berms in the Peak. If you can hold your line out of the second you pedal hard in to a big booter with a lovely flat landing. All over in less than a minute, which most of the other lads are used to.

Helmet Camera footage by Duncan Philpott featuring Ruari, Swinny and Dunc’s own crash at the start

The series is starting to draw more of a crowd and certainly more attention. Last night we had nearly as many spectators, hecklers and drinkers as we did riders. Thankfully it was an experienced crowd who’d brought pans and wooden spoons to make as much noise as possible. Perhaps not quite what was wanted in the middle of the Peak District but certainly what was wanted for a great racing atmosphere. The race was slated to start at 7:30 so riders were up practising from about 6 and the tight wooded section quickly claimed a few casualties. ThisISheffield’s in house photo genius Duncan PhiliPhoto was already bleeding by the time I arrived, his arm had lost in an argument with a tree. He later did exactly the same thing again in the same spot which put him out of the race. Thankfully this meant he took lots of great photos. Henry Marsh managed to head butt a tree which also finished his racing for the night meaning he took photos too, thank you.

Pushing back up for another run (Photo: Duncan Philpott)

After all the racers had chucked 2 quid in to the jam jar and popped a prize in to the bag racing got underway. Henry Norman still out from racing with injury but concentrating on marathon training was kind enough to take on timing duties ably assisted by Simon Garrard. Simone was unfortunate enough to take the starters roll so spent half an hour stood at the top of the exposed track gradually freezing his tits off in the wind as the sun went down. The later racers also had to suffer the same fate hiding in the heather to keep warm. Reports of Swinny kissing caterpillars were greatly exaggerated. Joe Bowman was out of the race again due mechanical issues, with his van. However, he did turn up to heckle and session the track on the Cotic X. Going back to the old school, mobile phones and a stop watch were all we needed and each racer was sent down the hill in turn with a “3, 2, 1” and a Tarzan cry.

Racers waiting for their run with Si Garrard ready to send them off (Photo: Duncan Philpott)

Jordan Gould took an early lead, 6th out of the ‘start hut’ and getting down in 37.12 also reportedly putting in the best jump off the bottom booter. I was next down the hill and put in a 39.97 sliding me in to an early 2nd place. However, next down was Ruari ‘POD’ Hallam who sent the final jump in a 37.91 closely followed by Steve ‘BikeTrack.org’ Taylor with a 39.94. The Ladies made a welcome return to racing with Jody Vallance bringing along Liz Bowman (any relation?) for her first race. Liz took the win with a 53.53 on only her 4th mountain bike ride in 3 years and was looking pinned over the top section. She narrowly beat Jody by just over a second and it was a good ride from both lasses. The next rider down the hill to worry the leaders was series leader Will Swinden. There was a real split between riders on hardtails or full bounce and strangely there didn’t seem to be much between them. Will was on his Curtis and put down a 38.56 sliding him in to third spot, however his elder brother was about to get on track. Swinny was looking super fast all night and also had the recovery of the night. Getting out of shape on the top section he clipped a bush, pitching him forward on his front wheel towards a little booter. Somehow flying off this he managed to get back on two wheels and make the next corner, amazing control. Swinny took 1.5 seconds out of Jordan with a winning time of 35.59 and a well deserved return to the podium.

Swinny victorious on the Podium with Tunnocks (Photo: Henry Marsh)

Prizes were given out in the traditional fashion with Swinny opting for the Tunnocks’ Tea cakes and Jordan taking Haribo. Jordan had once again produced a brilliant trophy which will have to be presented later as he left it at home. My apologies to Dave Camus who I mistakenly missed out of the roll call so only ended up with a University of Sheffield T-shirt. With racing done we retired to the warmth and comfort of the Cricket Inn to rehydrate, although Eighteen bikes’ Si Bowns decided to have a pint on his own in the crown. Talk naturally turned to future series plans with some great ideas coming from all corners, my favourite though was Jolley’s suggestion. “Starting at the top of Porter Clough, first neck a two litre bottle of strongbow, run to your bike, then ride as fast as you can to Corp and the first to pull a fat bird wins”. Genius.

So the series standings. No change at the top, Will Swinden extends his lead with myself narrowly in second place. Swinny jumps up four places to 3rd spot only 1 point ahead of Jordan and Ruari jumps from mid-pack up to 5th.

Series Standings after round 3

Next race – Mass Start DH. Details will be in the calendar.

Since I’ve been at uni there has always been a good association between the University of Sheffield and Sheffield Hallam cycling clubs. We’ll often meet a few of them out riding at Wharncliffe and there is the usual exchange of pleasantries. There is some rivalry as you’d expect but it is all in good humour and no one takes the banter seriously (We go somewhere you don’t go, UNI! UNI!, Hallam scum!, etc…). Having the surname Hallam is rather unfortunate and things can get confusing when you’re at Uni and the nasties are flying.

The varsity event is held each year to see which university is the best at various sports. Some are taken much more seriously than others and most of the venues lie in the city. However, in our case the competition is purely for fun and there are no spectators so the atmosphere is very relaxed, just like any other mates race.

The track we used on this occasion started with the top quarter of “Fast Track” and peeled off to the right after the third bus stop, continuing into what is known to me as “track with no name” or “1000 Deaths” by others (some people have no imagination). For those that don’t know Fast Track is a flat out, rocky section of track with small jumps into bus stops off of a push-up track. 1000 Deaths is tight and twisty with a couple of rock gardens and flat corners, also, the trees are quite densely packed which led to a few collisions and crashes.

Here’s a shot of Henry ‘Yeti’ Marsh during practice. Everyone that raced should be grateful to him for sitting it out and timing us!

For the first run the track was running almost bone dry as the small amount of rain from the previous night had either been absorbed into the parched earth or had evaporated. Despite this, very few people were happy with their run due to clipping/colliding with trees or just not hitting the lines they’d practiced. Ed Thomsett wasn’t really feeling it so just cruised and didn’t pedal on the flatter parts of the track. Andy Fowles was looking quick in practice but had a tentative run and clipped the odd tree. My run was similar as I just wanted a clean run, I was on the brakes too much in places so didn’t carry great speed in the tighter sections and also had trouble fitting my trendy, 762mm wide bars through the gaps.

During the brief respite before the push up for everyone’s second run a light rain shower began and continued until racing recommenced, this made the rocks on fast track slippery and greased up the last 50 meters of track. The poorer conditions led to more detrimental crashes, although, some people managed to improve on their times. Ed pulled his finger out and decided to put in a good time, this effort was hampered when he suffered a similar fate to others and came to a complete stop to give a tree some close attention. Andy had a crash in his run so there was no chance of him improving on his time. My second run was sketchy at the top after the drizzle, I rode well on the rest of the track and was on for beating my time by at least a second or two, until the last corner before the finish line. I took the inside line as I had done throughout practice but my front end washed out on a greased up root and I ate loam meters from the finish. A couple of others suffered the same misfortune almost at the identical spot.

Duncan was in Spielberg mode so didn’t take many still shots. Keep on the lookout for some race footage though, I’ve seen the clips and I can guarantee it’ll be a corker!

Oh yeah, results! – in short, Uni defeated Hallam!
For full results follow the link below. WARNING! You may want to reduce your screen brightness and wear some shades. Henry made this in paint and he seems quite proud of it: Click me!

This is my first post on this bit of cyberspace so i thought I’d give you a taster of what i do… Photos.

The slightly ambiguous title is all about where these photos were taken, Sheffield! Here are some shots from the past couple of months from riding spots local to Sheffield.

From the urban areas of the city we have the Bolehill BMX and Downhill: 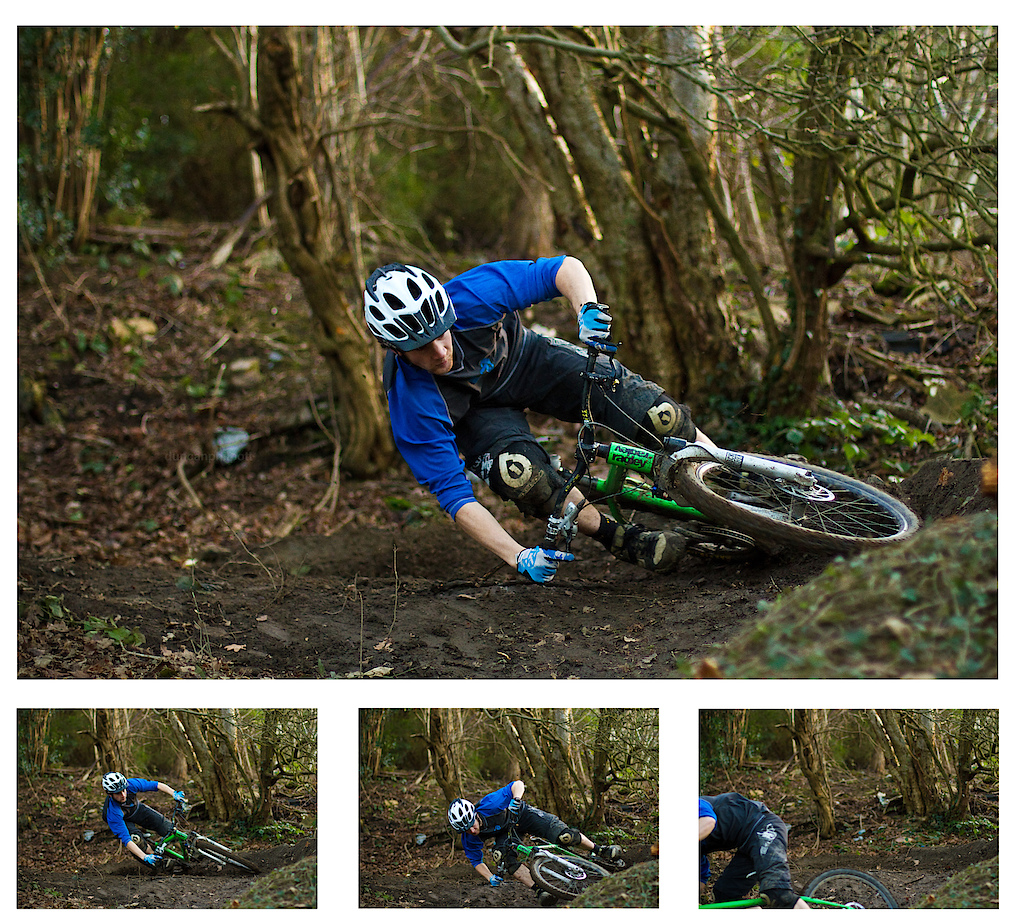 And not to forget the occasional street spot! 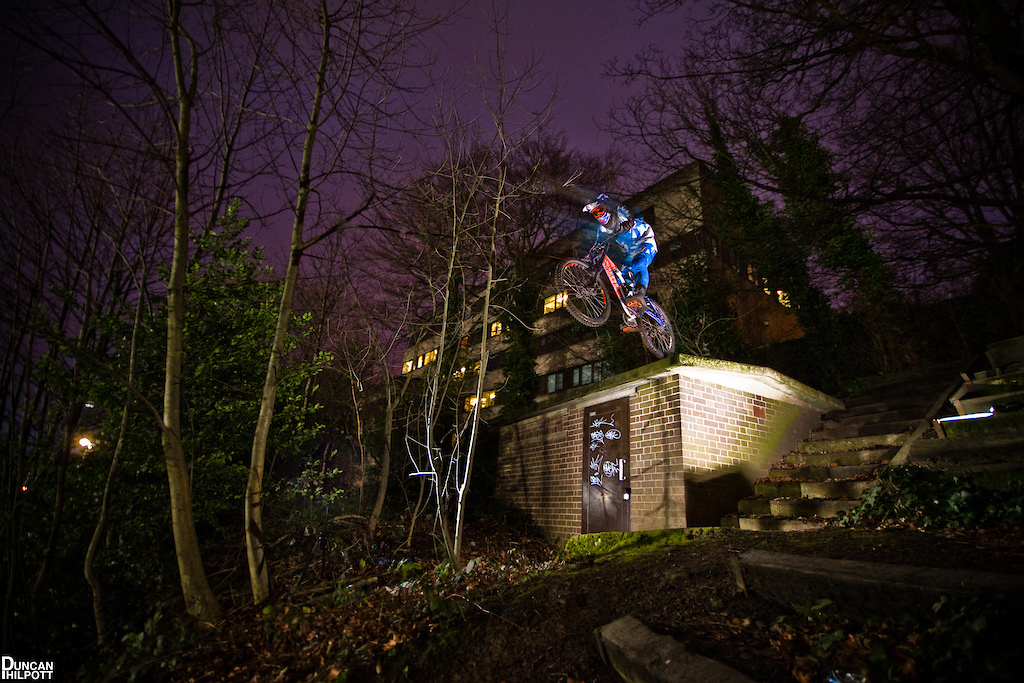 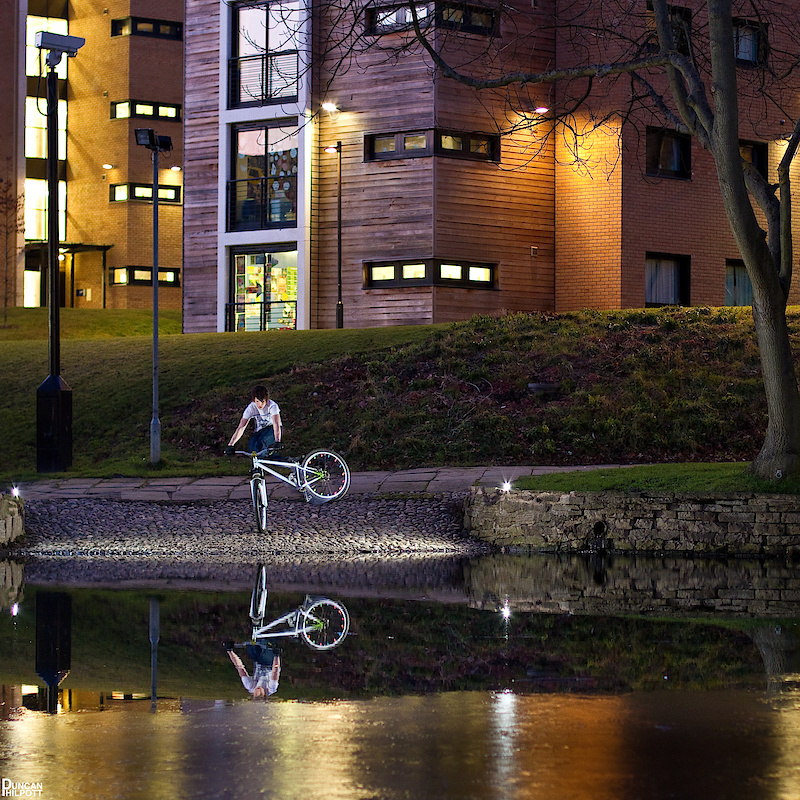 Next up we have one of the more widely known spots, Wharncliffe: 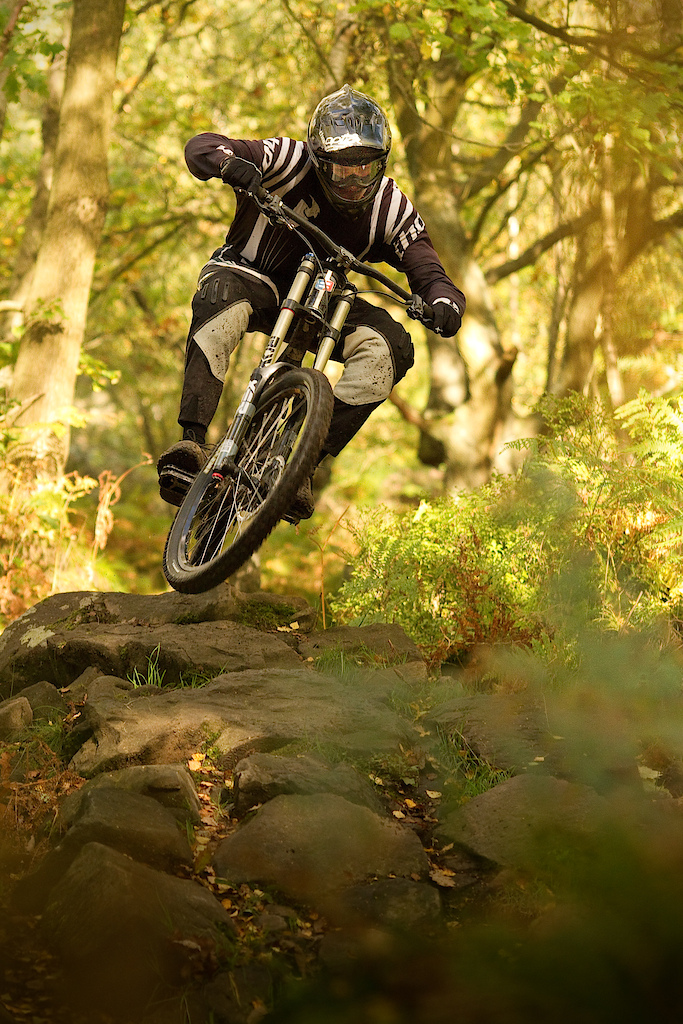 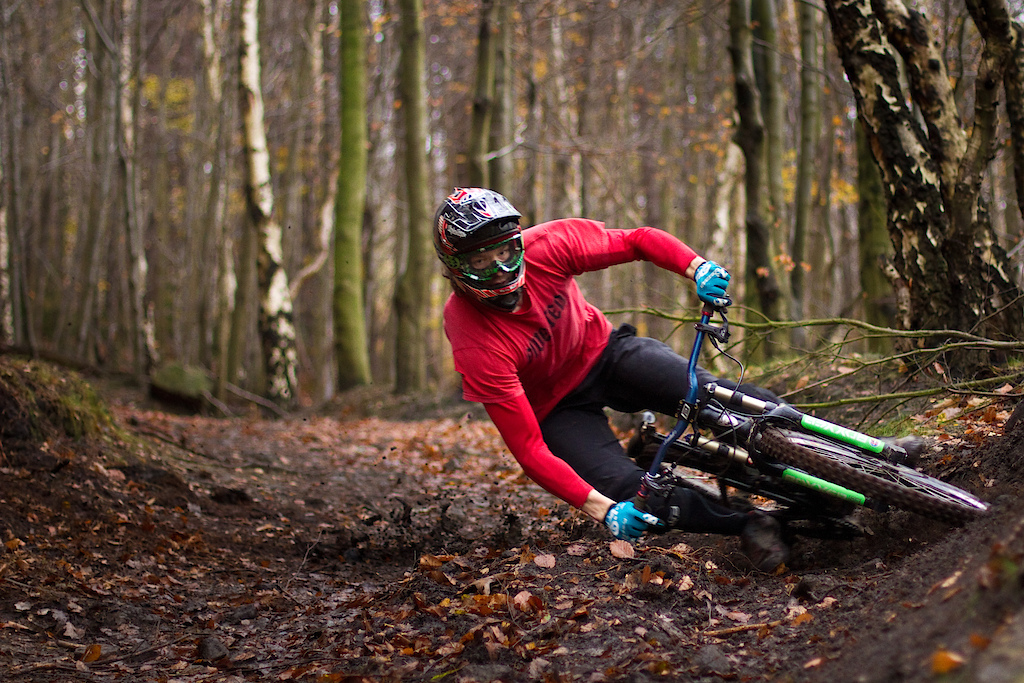 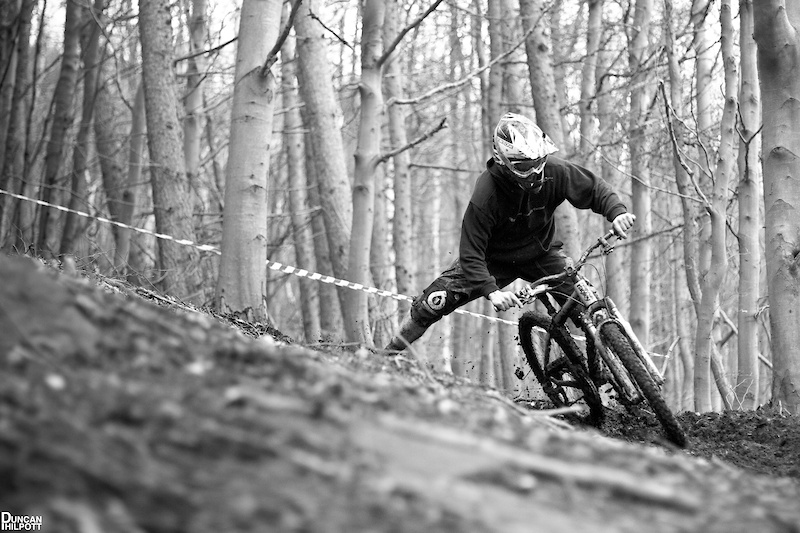 Then, not forgetting, the many miles of Peak District which border the city:

Well thanks for reading! Expect some of those moving photos in the future and enjoy the sun while its here.

Newer Posts →
Back to top