Matt Heason who organizes SHAFF seems to have finally realised that bike films are radderer than climbing films. This year they’ve added on a 3rd bike session with 12 bike films in total on over the weekend. There’s all the other usual SHAFF shenanigans on as well and inevitably the weather will be Shite that weekend, so you might as well watch films and stay dry.

I can personally recommend the documentary about Shaun Palmer, The Miserable Champion, which we watch at our winter get together.  There’s not a huge amount of biking in but theres lots of excess and Peaty basically calls him a Bellend…

Lacon De Catalonia
Spanish free rider Andreu Lacondeguy hones his skills on his 13 metre high run in at his training compound near Barcelona. As the Norwegian film-makers Antimedia put it: “we had a blast with a week of dirt, cameras, drones, motocross and mountain bikes”. Check out more of Andreu’s amazing talent in ‘Where the Trail Ends’.

Rockville
For one day every year the Italian Singlespeed Mafia transform the grounds of an abandoned 16th century villa in the Po Valley into the world’s most stylish cyclocross course.  Bellissimo!
Ride Positive: A Mountainbike Manifesto
German film-maker Tom Malecha’s call to arms is a short reminder to all the people who ride bikes to ride their bikes.   (PS We’re particularly proud to show Tom Malecha’s latest film as last year he won our Petzl ShAFF Shorts video competition with his innovative film ‘BI.KE – A Symmetric Vehicle’)

Silvia – Winter Trails With Matt Hunter
Canadian big mountain free rider Matt Hunter gets creative with a power drill in his shed to go and shred his local trails on studded tyres in the snow. Possibly the coolest night ride ever? (PS Before you get any ideas they got tyre studding expertise from GP Moto!)
Road Bike Party
UK trials bike legend Martyn Ashton takes the £10k carbon road bike used by Team Sky’s Bradley Wiggins to win the Tour de France for a ride with a difference.  Some of the toughest stunts you’ll ever see pulled on a carbon road bike and amazingly only one puncture during filming.
Sea of Rock
An adventure 40 years in the making.  In 1972 two Austrians decided to try the first ever mountain biking on a military bike stolen from their grandfathers.  Last summer Tom Oehler and Harald Philipp took on the challenge of Austria’s Mont Sommerstein (2308m) on the gnarly limestone with massive holes and crocodile sharp teeth. 8 days and 12 flat tyres later it was, as they put it, “Not your average day at the beach”.
Strength in Numbers
In the follow-up to their hit ‘Follow Me’ Anthill Films’ stated mission was to “explore the shared experiences that connect us all as mountain bikers”.  From the pros on the World Cup Circuit to kids on dirt jumps to the novice mountain bikers of Nepal, the film celebrates that taste of freedom you got the first time you rode your bike without stabilisers.  Featuring British athletes Gee and Rachel Atherton, Tracy Mosely and Sheffield’s finest, Steve Peat.

Cycle couriers have just two 2 rules – 1) no fixed gears and 2) no brakes.  Legendary racer Lucas Brunelle travels the world filming ‘Alleycat’ races between the world’s best urban cyclists from the vantage point of his own bike with his 10lb custom-built head bracketed to his helmet.  In ‘Line of Sight’ he teams up with Benny Zenga who turns the camera back on Lucas.

Janapar – Love on a Bike
Isn’t there more to life than this? 23-year-old Tom Allen escapes the rat race to search for the answer by cycling 12,000 miles round the world.  His dream’s thrown into turmoil when he falls in love and has to choose between settling down or continuing his adventure.  Will he choose romance or the road?

Note – we’re delighted that Tom will be doing a Q&A after Friday night’s showing of Janapar.

Where the Trail Ends
Their most ambitious mountain-biking yet – freeriders Darren Berrecloth, Cameron Zink, Kurtis Sorge, James Doerfling and Andreu Lacondeguy and co are on a three year mission to discover unridden terrain.  Filmed in Argentina, China, Nepal, British Columbia and Utah, the crew used the most advanced filmmaking and sound equipment ever used in the outdoor adventure sport genre with jet boats, helicopters and fixed wing aircraft providing a variety of unique perspectives for the audience.

Not your average ski/board movie.  “Pour Vous Servir” (translation – ‘At Your Service’) takes the spirit of freestyle and goes lateral, then does a 360.  Only the French could come up with Fight Club for ski bums and a naked cycling drag race.

Ski Boys (Adrenaline Films & Young Adventurers 2)
Presented as found footage, the ‘Ski Boys’ film reels show ‘Deek’ and his friends on their family farms in the summer of 1971 documenting their everyday adventures on Super 8 Film.  Their homemade inventions – including 8ft toboggans fitted with roller-skate wheels, a flying squirrel suit and the ‘road’ ski – epitomise the ‘Why Don’t You Just Switch Off Your Television Set and Go and Do Something Less Boring Instead?’ spirit.

And because variety’s the spice of life (and perhaps not all your family and friends are cyclists!) there’s a whole host of other adventure sports films, talks and lectures as well as four family-friendly Young Adventurers and two new Teen Screen showings.  Don’t forget the Showroom Cinema has a comfy bar/cafe with live music where you can relax in between screenings.  We’ll also have a MyOutdoorsUK photo exhibition and Single Shot photo competition and our second hand kit sale.  And on Friday night the one and only Niall Grimes will be hosting the ShAFF Adventure Quiz. 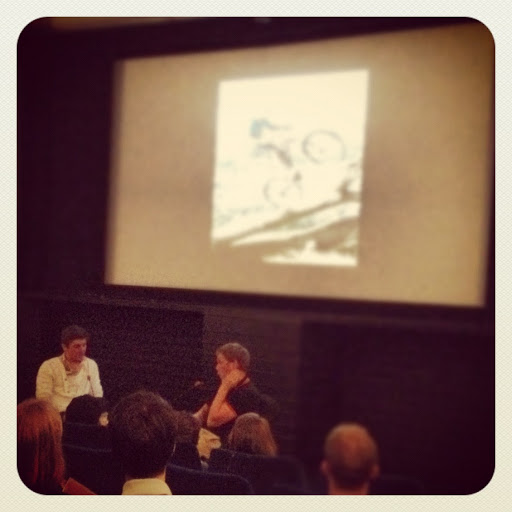 John Horscroft and Steve Peat, will be heading up the evening, focusing on the up and coming cycling talent in and around Sheffield.

A chilled out evening, with plenty of beers on tap, to keep things fun.

Tickets are available HERE so don’t miss out!

Sheffield’s Mountain Bike scene is arguably the most vibrant in the country with a wealth of superb cross-country trails in the Peak District, a thriving downhill community and a number of promising young riders hellbent on following in the tracks of local legend, Steve Peat.  So, what better way for the Bike Expert Night to celebrate that scene than to take a close look at some of the young guns making a name for themselves in a diverse range of bike disciplines?  James ‘Swinny’ Swinden, Josh ‘Loosedog’ Lewis, Annie Last and Abbie Taylor are Sheffield hard-chargers with talent to burn.  Local mountain biker, scribe and rabble-rouser John Horscroft and special guest Steve Peat will be asking the questions and finding out what makes the next generation of super-shredders tick.

James ‘Swinny’ Swinden has steadily built a reputation for phenomenal pace in the National Downhill Series and has a huge viral video presence.  2012 however could be the big year for Swinny as he has just joined the Steve Peat Syndicate and moved up to the Elite category in this year’s series.

Josh ‘Loosedog’ Lewis has a similar story to Swinny. Known as one of Steve Peat’s protégées, he’s got big boots to fill. But with a huge personality and a growing profile in the UK scene, he’s another Junior rider to look out for.   There’s every chance we’ll see him moving up the rankings in 2012.

Abbie Taylor is an Olympic hopeful in the newly added sport of BMX Racing. A World Silver Medalist in 2011, she regularly mixes it up with the top Female Elite riders.  She is now receiving help from British Cyclings’s Olympic Development program which could be all the help she needs to take things to the next level.

This is going to be big! Alex Rankin is putting together an exclusive Sprung/Earthed montage titled ‘progression’, for SHAFF film festival right here in Sheffield on March 5th.

Not only this, but during the day we will be hosting a race locally. Everything is still TBC, but if it all goes to plan it could be a classic weekend!

You have to understand where you have been to know where you are going: Alex Rankin’s iconic mountain bike series Sprung and Earthed documented the rapid development of mountain biking as well as showcasing the developments in adventure film making.
This exclusive screening will showcase scenes from all ten films in chronological order and will be followed by an interview and a Q&A with one of the legends of the sport Steve Peat: Discussing how he has managed to stay on top in a rapidly progressing sport and how he sees it developing in the future

This is a World Exclusive Screening

For more information on this and other events at SHAFF www.shaff.co.uk

Race:
thisisheffield, CGCC and Ride Sheffield Are also planning some kind of gravity fed race that will be held during the day – details of this event will be announced shortly on www.thisisheffield.co.uk  If all goes to plan, this will be a corker of an event….

Party: As always at SHAFF there will be an after party held in the Showroom bar – for details check out the SHAFF website

If you need to get in touch, mail: ThisisSheffield@gmail.com