Aim: to celebrate the end of the Spring/Summer series or just summer in general and to mark the start of the autumn series.

We kicked off with the dual practice and racing. The track didn’t follow the normal layout of just weaving through electric fence posts. Well, it was partly that but it also included some other features; one berm with a PODtential kicker out of it on one line and a solitary kicker on the other. The higher, right-hand line was marginally quicker as the lower line had a long off-camber right which led slightly uphill into a tight left. The courses recombined near the bottom with the possibility of some carnage as a drifty left-hander on the inside line before the finish could have led to a collision if the racing was tight. 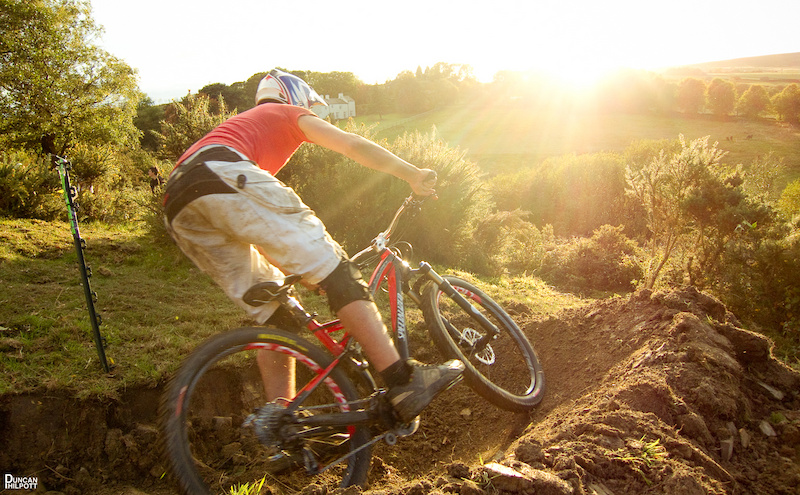 Craig Evans of This is Stocksbridge.

So, the racing. I enjoyed it so I’ll try and go through my experience of it as best I can. Numbers were dealt at random as usual and I was pitched against Nick for my first race. Racing Nick always seems to fill me with apprehension, especially after the incident at the speedway where he used his foot to dislodge a local youth from an upright position. I made a slight balls-up braking too much in a corner where I hadn’t even touched them in practice so pushed on the bottom turns. Meters from the line, however, Nick went too hot into the drifty left-hander and his front wheel washed out from under him so I just had to finish my next run without crashing.
Next up I faced Chris Pearson after he knocked his brother out in the 1st round. I started on the inside line on this occasion and had an OK run. However, Chris had a pretty brutal and mysterious over-the-bars crash not far from the end so again I just had to not crash on my 2nd run.
Progressing into the final, I faced Swinny who had knocked out James Crossland and Craig in prior rounds (A TiSheff victory over TiStocksbridge). The pressure was on as Swinny was on home soil and had been looking quick all night, as always. I had a promising start with a then joint fastest time (set by Will Swinden) on the right-hand line.

Final run, the light was fading and the moon(s) was starting to appear. I pedalled as much as I could out of the start and had loads of speed round the off-camber right, back on the pedals and staying low over the jump and round the last few turns to the finish. I tried to stay tight and smooth instead of hanging it out as I just didn’t trust my tyres to grip. Crossing the line, Swinny had smashed the previous fastest run by half a second. After a bit of number crunching though, my run down the left line was 0.6 of a second quicker than Swinny’s time on the left line. I’d won (finally!) by 0.1 of a second, bang tidy.

Next up was an XC eliminator race titled “The Devil Takes Hind”, dreamt up by Nick in what seemed just a few seconds (he’s always sprouting ideas for a race). The idea was to have a mass start to a small loop in the field, however at the end of each lap the person in last place was eliminated. Starting from the front I went round the berm used in the dual, sprinted a bit but content with my win in the dual gave up and gooned across the line to be eliminated straight away. Swinny stayed in the middle of the pack to conserve his energy but powered away in the closing laps to redeem himself and take the win, followed by Nick in 2nd and Tim in 3rd. Everyone else knows where they came though.

Lee's attire for the eliminator was interesting.

Party time! The sun was fading so the bonfire was lit to provide warmth and light. Sausages and burgers were sizzling on the barbecue and thirsts were being quenched by cans of booze. Nick introduced another game, this time a bottle of rum was the source of the fun. Based on how well you’d done in previous rounds of the spring series you had to down a certain number of lid fulls of rum, 1 for 5th place, 2 for 4th, 3 for 3rd, etc. Unlucky for Swinny, he’d won a fair few so had at least 20 caps of rum although this went to waste after a tactical vom.
We are a competitive bunch of people so the games continued. Next up was a bunny hop contest to see who could hop the highest, simple although made difficult by the lack of light and the consumption of alcohol which impeded judgment (although lack of skill was more my excuse). Swinden senior’s use of lighter fluid did help to illuminate the bar. Swinny somehow managed to go over the bars, although he did clear the height of the bar so was allowed to continue. The eventual winner was Will Swinden who managed to hop roughly the height of his stem, so not a bad set of results for the Swinden family.

The next competition was not related to bikes, more your ability to lift a large log just using the palms of your hands. I’m not sure who the eventual winner of this was although I think Alex Owen put his arborist skills to good use to post a reasonable number of lifts. This didn’t impress me enough though as when asked by him if I’d marry him or Rob Jolley I plucked for Jolley… how could I refuse?
By 1am the fire started to die down and there was no more fuel to add to it. After a tough evening of being manly it was time for everyone to retire to the warmth of the Swinden abode (if you were lucky), or to your bivvy bag (if you were Nick). Not before a dip in a pond though.

Many thanks to Swinny, Alex, Jolley, Tim and Ol for their hard work setting up the track and the beauty of a berm/kicker they constructed. To Mr and Mrs “Swinny” for letting us use the field, not just on this occasion, and for bringing Will and James into the world… Also to Henry Norman and Martin Baker for timing the dual.

It wouldn't have been the same without fire.

Some more pics from Duncan here.